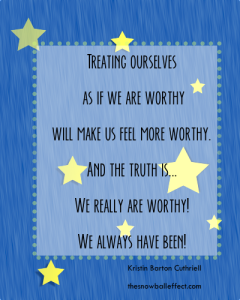 These people don’t make excuses. They are not threatened by their errors and know that their mistakes do not decrease their worth. This personal accountability creates positive momentum and spills over into relationships.

Self-compassionate people are able to see themselves more realistically. When they mess up, they still see themselves as a good person. They know that the mistake doesn’t define their worth.

To help with self-compassion remember this:

If you learn from your mistakes, there are no failures. There are only successes and opportunities to learn. View each setback as a step closer to success. Focus not on being a failure, but on what was learned so that you can continue to move forward in a positive direction.

One more thing to remember:

No one is perfect. If you beat yourself up over being imperfect, you will never be happy. Strive for excellence, but focus on progress rather than perfection.