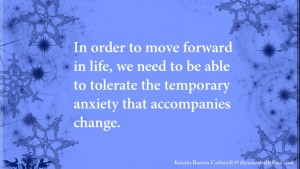 “In order to move forward in life, we need to be able to tolerate the temporary anxiety that accompanies change.”

The following is an excerpt from my book, The Snowball Effect: How to Build Positive Momentum in Your Life.

Another reason we so often avoid change and settle for the status quo is that change involves loss. No matter how badly you want to get out of a situation, it usually involves losing something. In order to move on to something new, you must give up something. Whether the thing you are leaving behind is something that you cherish or despise, it is familiar to you. It may be a familiar routine, a lifestyle, a relationship, a job, or even an addiction. When you give up something, you will most likely feel some degree of sadness. Even some of the most celebrated events in your life involve loss. Graduations, weddings, births, new jobs, and relocations, no matter how exciting, signify the end of an era. With all new beginnings, something is left behind, and we often fear leaving the familiar to walk out into uncharted territories.

While working with individuals in both inpatient and outpatient substance abuse facilities, I learned that people in recovery experience a great deal of loss when giving up their addiction. Even when they feel as if they have hit rock bottom and have lost everything in their life that is important to them, they grieve the substance that they are giving up. No matter how much they desperately want to change, they grieve the thing that they have come to rely on—their addiction.

Even people who are leaving abusive relationships usually experience profound feelings of loss. Victims of domestic violence will usually tell you that the relationship wasn’t all bad, and that there were things that they loved about their abuser. If you study domestic violence and the cycle of abuse, you will see that a honeymoon stage usually follows an abusive act. During this honeymoon stage, an abuser often apologizes for the abuse, promising never to do it again. It is at this time that the abuser is extremely loving and compassionate toward the victim. While the abuse itself sometimes motivates a victim to make a change, anxiety and feelings of loss will arise when a victim begins to contemplate leaving the relationship. These feelings will make it more likely that the victim will make no change at all.

The Snowball Effect: How to Build Positive Momentum in Your Life. If you would like to read more, you can go to my website here at www.thesnowballeffect.com and sign up for a free chunk along with weekly positive momentum tools, or you can check it out on Amazon. It is available in soft cover and kindle edition. Kindle Edition is now only $3.03. Be sure to read the Amazon reviews. I love that this book is helping people live happier lives. P.S. It is available at barnesandnoble.com too!

Take a look at another little chunk of the Pushing Past the Fear to Move Forward chapter.

Without change we can’t grow. If we allow our anxieties to hold us back, we pull ourselves down. We create our own friction and resistance, friction and resistance that block positive momentum and stop the snowball effect dead in its tracks. We cannot survive in any job or in any relationship if we are not willing to adapt to change. Think about it. Physicians need to know the most up-to-date medications and procedures. Teachers need to know the most current curriculum. Whether you work for a large corporation or you need to know how to turn on your new television, you will need to embrace change.

Relationships do not survive unless both people are able to endure change. Just this morning, I heard a woman telling another woman that her husband used to work as the guitar player in a rock band before he became the pastor at a local church. I feel pretty confident that going from playing in a rock band to pastoring a church involved change, not just on the part of the woman’s husband, but on her as well. Switching careers usually involves some degree of lifestyle change, which requires both individuals involved in a committed partnership to adapt if the relationship is to survive.

Some changes happen whether we like it or not. There simply is no choice, and sometimes this is a good thing. Think about all of the changes we go through during adolescence. Luckily we don’t have to decide whether or not we want to go through puberty and deal with the anxiety such a decision would bring. It just happens—and if it didn’t, we would never move into adulthood. But to get to adulthood, we had to endure the difficult transition of adolescence. We had to deal with pimples, mood swings, and peer pressure. We had to experience hormonal changes, awkward growth spurts, and squeaky voices, on top of other bodily changes and the push and pull for independence. But those changes were temporary, and as rough as it might have been, we made it through to adulthood. I sometimes wonder how many of us would still be children if the transition had been a choice.

When you consistently resist and avoid all change, you stop moving forward in life. You stay stuck right where you are. You do not reach your full potential, and neither do your relationships with others. Most of us have, at one time or another, made up excuses to avoid change. These would include all types of procrastination techniques to put off exercising, eating healthy, cleaning, studying, job seeking, or making doctor’s appointments.

Years ago a friend of mine, a very educated and skilled professional, disclosed to me his plans to find another job. After being with his company for several years, he felt that he had grown as much as he could with the current company and needed to branch out and look for opportunities that would promote his personal and professional growth. His current position did not allow him to fully utilize his professional skills and education.

As he sent out his resume and went on numerous interviews, many opportunities presented themselves to him. He was being recruited by several wonderful companies that would have provided him with the growth and compensation he was looking for. But instead of taking the leap, he continually sabotaged himself, making excuses as to why the opportunities might not work for him. I knew that he was unhappy in his current job, but he chose to stay there rather than put up with the temporary anxiety that would come with a job change. He allowed his fear to hold him back from some pretty amazing opportunities. This kept him stuck in a motionless status quo.

Take a moment to answer the following questions:

Life is just too short to spend it in fear. Having the courage to face those fears can take you to places you never thought possible. Remember that anything new becomes comfortable and routine if it is done long enough. Identify the things that are going well in your life. These are the things that you probably don’t want to change. But also identify areas of needed growth. Making changes here will propel you to a much higher altitude. Making changes here may be necessary if you are to experience the best version of you. Sometimes it is only he who attempts the ridiculous that ever achieves the impossible.

Sometimes we need to take risks in order to grow. How are we to create a positive snowball effect if we consistently refuse to move? Positive momentum is created by motion. Norman Vincent Peale tells us, “Action is a great restorer and builder of confidence. Inaction is not only the result, but the cause, of fear. Perhaps the action you take will be successful; perhaps different action or adjustments will have to follow. But any action is better than no action at all.”4 Remember that. Life rewards action. Face the fear that holds you back from the things that you really want in life. Eleanor Roosevelt put it so well: “You gain strength, courage, and confidence by every experience in which you really stop to look fear in the face. You are able to say to yourself, I lived through this horror. I can take the next thing that comes along.” And do you know what? The very thing that you fear many times ends up to be no horror at all.

To read  step by step how to change, check out The Snowball Effect: How to Build Positive Momentum in Your Life.

I hope this helps you! Have a great day! Kristin