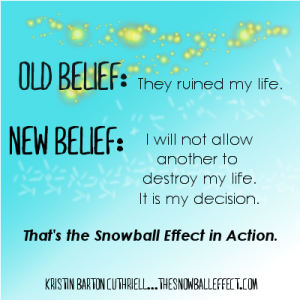 Do you feel bitter? Are you full of resentment? If so, you are holding yourself back from being who you were designed to be. You are wasting precious energy on those who have hurt you which steals energy away from those who are loving you. I often tell clients that the only thing worse than someone else hurting you in the past is you continuing to hurt yourself in the present and in the future.

If you are tired of holding on to resentment and recognize the toxic effect it has on you, changing some of your beliefs about letting go can help. Take a look at these 8 new beliefs that will help you let go of resentment so that you can begin to enjoy life again.

Once you shift your perception, letting go will be easier to embrace. And once you begin to let go, you will begin to gain positive momentum in your life, even during the most challenging times. Letting go leads to true freedom. Isn’t it time to give yourself that freedom?

If you would like other tools such as the sticky note approach to help you let go of resentment, check out my book, The Snowball Effect: How to Build Positive Momentum in Your Life, available through Amazon in both soft cover and kindle version. Kindle version is now only $3.03.